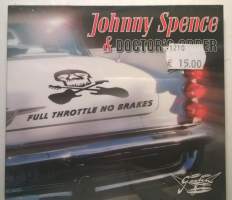 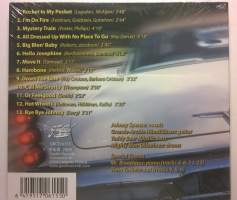 British rocker Johnny Spence was born in February 1944, and started playing
rock'n'roll already in late 50's. In the early 60's he played bass for Johnny Kidd
and the Pirates for five years. Classic Pirates line-up featuring Johnny Spence on
bass, Mick Green on guitar and Frank Farley on drums played on most of Johnny Kidd's
greatest recordings and hits. They made their first recording on their own (without
Kidd) already in 1964, the single "My babe"/"Casting my spell" (featuring Spence
also on vocals) is ever since considered a classic.
In the mid 70's the classic line-up of the Pirates came back, and very soon got the
reputation of being the greatest and wildest rock'n'roll trio of all time. From that
time we have the saying "never follow the Pirates".
They were unbeatable on stage, and also made some great albums like "Out of their
skulls", "Skull wars", "Happy birthday rock'n'roll" and "Fistful of Dubloons". The
Pirates (with Spence and Green still on board) are still very much active and still
the best rock trio in the world.
During all these years Johnny Spence has also played with various other artists,
for example bass for Jerry Lee Lewis.

Doctor's Order is Finland's finest and toughest rock'n'roll trio, who started in
1998 and ever since has toured and amazed audiences with its hard driving music
and action packed stage shows all over Finland and also in Sweden. So far they
have released six studio albums, which have sold very well and which have got
raving reviews. Last year was band's 10th anniversary, and to celebrate the
occasion the Doc's toured more than ever and released an album "Seleccion Grande"
(Goofin' Records), which was a very fine set of rock'n'roll with some rhythm &
blues flavours with a very big rockin' sound and featured seventeen original
tracks. They also did a special anniversary tour with Johnny Spence as a guest
vocalist.

During last five years The Pirates and Doctor's Order have done quite a few
successful tours together in Finland. Already in 2007 a six track mini-album
"Doctor's Order with Mick Green: "Cutthroat and Dangerous"
(Goofin' Records) was released, Johnny Spence guested on one track.

One thing led to another and here comes the NEWS: Now Johnny and the doctors have
made an album together. Johnny Spence & Doctor's Order:
"Full Throttle No Brakes" features a stunning set of rock'n'roll, rockabilly and
rhythm & blues. The sound is tough, rough and pretty big, or should we say huge
There's 13 tracks, all classic rock'n'roll songs picked for the album by Johnny and
his fellow finnish docs. The kind of songs that have originally been performed by
such artists like Carl Perkins, Jerry Lee Lewis, Mungo Jerry, Hayden Thompson,
Elvis, Cliff Richard, Chuck Berry, Fats Domino, Johnny Kidd and others.